Excitement, fear of the unknown, happiness, gratitude — just a few feelings running through me as I sat down in my seat on the Deutsche Bahn looking out the window on my way to Berlin!

Here I was officially on my way to the country’s capital and really beginning my travels on my own.

Fittingly enough, for my first solo stay in Europe I booked a hostel.

I feel like staying in a hostel is a must when you’re exploring the world on your own for the first time, gotta have those experiences in your back pocket.  I should add though, the night before my cousin and I were looking online for hotel options and the only availabilities were either WAY out of my budget or not in an area close to where I wanted to be (Mitte) — so piece of advice when you plan to go to Berlin: book in advance no matter what time of year!

That said, while I was excited to have the hostel experience, I still wanted my own space, so I made sure to book my own private suite.

I lucked out BIG time and found the cutest hostel in Mitte, Berlin, The Circus Hostel (booked on the Hostel World app on my phone, after reading a lot of positive reviews and looking at its website).

I had my heart set on that area because it’s in the centre of historical attractions, a shopping district and has endless options for eats, plus my family recommended it as well.

My dorm was so cute: bright, had a big bed (well, two singles pushed together — but felt big!), couch, kitchenette, and full bathroom — but the view was my favourite, overlooking the city, these photos don’t give it justice!

After getting settled in that early evening after taking the tram from the train station to my hostel, I went to wander the city before the sun went down: I’ll never forget that moment I was in the middle of Rosenthaler Platz and looking at the Fernsehturm (the tallest building in Berlin, the TV tower) with the cotton candy sky backdrop.

I had one plan in that moment: walk towards the Fernsehturm, get dinner, then grab a bottle of wine and head back ‘home’ with some treats to curl up in bed with a book.

On the way, I walked by a lot of cool looking restaurants, stylish boutiques, and had dinner in a plaza near the Hackescher Markt Station (you can tell it’s a hot spot for tourists) where there was a 2-man band performing a variety of songs as I sat on the patio — with an entire pizza and wine, thank you.

I can’t believe I get to say that I’m sitting down in Berlin for dinner! I’m already in love with Germany’s capital – beautiful buildings painted in pastel colours and fabulous fashion boutiques! Apparently I’m trendy because I’m wearing a fanny pack, not to brag 💃🏻 pic.twitter.com/1XgTSHigPG 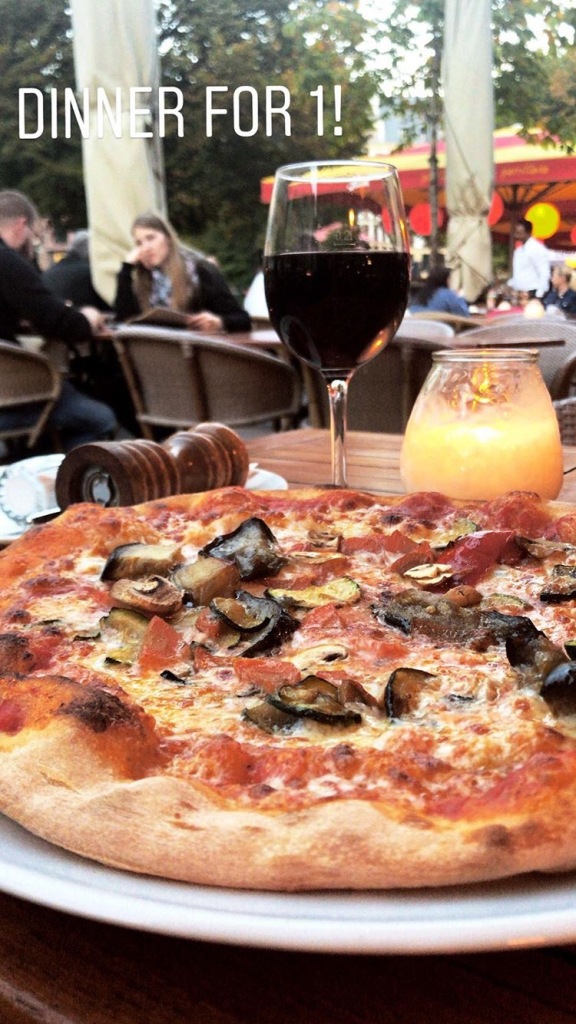 As I sat there stuffing my face and enjoying the music, I was surprised when my server asked me out on a date — which never happens in Vancouver (if you’re single reading this, I know you feel me) — but it turned into a regular occurrence throughout my travels. I love Europe.

I respectfully declined the lovely young man, but felt very flattered of course!

On my way back home that evening, I stopped by a market to get my goodies, and when I was in line to pay, a man (maybe in his 40s) nicely dressed in a stylish striped long-sleeve T-shirt and wearing a beret totally made fun of me because it was so obvious I was not from there — what gave it away? I had a lock on my Herschel backpack.

I know… total nerd. I’ll pause for you to laugh at me.

After he poked fun, reminding me that a lock won’t stop someone from stealing my ENTIRE bag (LOL) he offered to walk with me for a bit.

“Where are you from?” he asked.

“You must be vegetarian!  I hear all Canadian women from there are very healthy and like smoothies,” he said.

I had a good laugh and told him he wasn’t wrong! “But we don’t actually love kale as much as you might hear.”

I never did catch his name, it was beginning to get quite dark, so I wanted to get back to my dorm — he gave me some suggestions of where to check out and we said good night.

Across the street from my hostel was this cute cafe, St. Oberholz — plenty of healthy options to kick start your morning with (breakfast sandwiches, croissants, muffins, granola, breaky bars), also can you tell what drew me to it in the first place?

Since I really only had a full day to explore and see the major sites on my list, I wanted to allow myself a lot of time, so I planned out the points I wanted to go on Google Maps the night before.

I wanted my trip to be filled with stories and sightseeing, shopping wasn’t a priority.  I wanted a heart full of memories and experiences, not material — but I did bring myself home a couple of timeless pieces, so everyday I have a bit of Europe with me.

If you are interested in shopping, you can find a lot of funky shops in the Rosenthaler Platz area, on Rosenthaler Straße towards the Fernsehturm, and also another street I stumbled upon when I was heading to the Berlin Wall Memorial is Münzstraße — but you will find a lot of cool stores everywhere, these two just stood out the most for me.

The shops along there reminded me a lot of Gastown and Yaletown with unique clothing boutiques, stores filled with eclectic art and home decor.

A heads up for the tower:  you can ride all the way to the top for an apparently epic (I don’t use that word lightly) view of the city — but because it’s a huge tourist attraction, buy your tickets in advance.  When I went there was a huge line, but I wasn’t disappointed to miss out on that experience, I wanted to see Berlin on the ground.

Near the tower is Alexanderplatz, it’s a buzzing public square that’s a bit of a transit hub, has a cool fountain a lot of people were taking pictures with.  You can see that and the tower up close in my IG highlights titled “Germany” and “Germany P3.”

Looking at the Berlin Wall Memorial today left me without words. To be there and actually SEE what we learned about and saw photos of in books/online was surreal. The width of the Berlin Wall is a little longer than the length between the tip of my fingers to the end of my palm. It’s astonishing how something that seems so thin created such a massive divide. I also visited the Memorial to the Murdered Jews of Europe, which was haunting. When you have an opportunity to come to Berlin (if you haven’t already), these two historical sites are a must on the list. I’ve also posted some photos and videos on my IG stories for you to see them through ‘my eyes.’ Watch “Germany” or “Germany P3”

MEMORIAL TO THE MURDERED JEWS OF EUROPE

After a day filled with exploring, I met up with an old girlfriend who now lives in the Mitte area, Leonie!  We went for cocktails at this Italian bar called Bar Milano on Rosenthaler Straße near my hostel. Very cool inside: modern, a nice cocktail list and the service was dynamite — it was a little quiet when we were there so the manager brought us over complimentary appetizers (mini fine finger sandwiches) to enjoy.  As I’m a wine woman, I had the Pinot Bianco — I highly recommend going there for a drink!

Shortly after, I went for dinner and embraced each moment that evening under the night sky, knowing it was my last time for a while in Germany.

I just can’t emphasize enough how it truly feels like home everywhere I go there.

The next morning I went to my favourite coffee shop to pick up breakfast, headed back to pack up and get ready to go to Prague.

And may this next nugget be a reminder: ALWAYS get medical insurance when you travel.

When I was waiting for the tram to head to the train station, I noticed my finger looked like a red balloon — CLEARLY infected.

Several days before I left for my trip I had a hangnail… nothing out of the ordinary, and thought it would just heal like all the others.

Well… because of Murphy’s Law — when I go travel overseas by myself, this ONE gets infected! Ugh.

Luckily I had extra time to spare — and there was a pharmacy literally right behind the tram stop — I ran in with my behemoth of a backpack and large purse.

“Hi! I’m from Canada and travelling by myself, I think there’s something wrong with my finger…”

As I try to hide that I’m about to cry because I already have anxiety issues, “okay, what can I do to help it?”

“You’ll have to pop it to get the fluid out, put medication on it, if it doesn’t heal in a couple of days, it’ll have to be cut open.” — again, zero emotion.

“Okay!” I say shaking as tears come pouring out, “Great!” trying to be cool, “I’ll take the best medication you have!”

The lovely pharmacist (she began to soften once the uncontrollable waterworks came out and was very helpful), “we have a mild treatment or the strongest one, which smells, and you will not make friends while you travel.”

“TOTALLY cool,” I said laughing, “I have plenty at home in Canada!”

Some tears and bandaids later, I’m back at the tram stop in time for my ride to the train!

*SPOILER*  my finger healed and I didn’t need surgery — thank the sweet Lord!  But at least I would’ve been covered!

When you don’t have an Instagram husband, you gotta set that timer and pray to 8 pound 6 ounce Baby Jesus that the wind doesn’t blow your iphone over the edge 🙏🏻 I had my last coffee (for now) in Germany this morning! This country has a special spot in my heart, of course, with my family here, the incredible history and beautiful architecture. It’s safe to say I can survive off of bread, pretzels, cake, bier and wein! I packed stretchy pants. Now off to Prague!

I really wish that I had one extra day in Berlin to explore, but I knew I’d be back — and I think if I kept prolonging my leave, I may have never left!